There are many ways to get your car started if your battery has died, but the truth is that most solutions will have you asking the help of a friend or of a friendly passerby. However, these can be in relatively small supply, precisely when you need them most, like on extra cold, really early morning when you are in a rush to get to work.

For those type of situations there is really only one way you can get your car started and that is by using a battery booster jump starter pack. Provided you have taken the time to keep it charged, a jump starter pack can get you going as fast and easy as your own car’s battery ought to.

That is why we decided to scour the market and find the best battery booster jump starter pack and eventually we wand up choosing the Clore ES5000 ‘Booster PAC’. We believe this is the best choice you currently have for several reasons, the first of which being its affordable price, and besides that here are some of the other reasons why we think it is the best.

The biggest problem most people have with any jump starter pack is that it is not fully charged when they need it to go. The way that the Clore ES5000 ‘Booster PAC’ solves that problem is you can just plug it in and just forget about it.

It has an automatic system that will go to a float charge once the battery is full. That means it will stay charge and, unlike laptop batteries, it will not go bad if you just leave it plug in for months. On the other hand, though, you should make sure that you double check it every couple of months or so to make sure that it is still fully charged. The biggest problem with jump starters is not how strong they are and if they can jump start an engine of a particular size. Most of the jump starters on our website, and specifically the Clore Automative in question is strong enough. However, because jump starter batteries tend to loose power over time, it is important to make sure that you have their full power available when you most need it.

It is for that reason that the Clore ES5000 ‘Booster PAC’ also has a second useful feature which is a 12V plug that allows you to use it as a portable charging station. Most drivers will have a tire inflator capable of using that port of power, but there are dozens and dozens of other automobile accessories that you can plug in the 12 volt port for power. Things like a portable beer cooler, a fan, an actual fridge or even freezer can all be powered by the Clore ES5000. There really is no limit to how many items can be powered by this little jump starters. And the best thing about expanding on the uses you get out of your jump starter is that you stay in contact with it. You will know that it needs to be charged after a long summer beach party or after a hunting trip even if you did not really jump start any cars with it.

We believe that is a very important feature because, being able to use your battery booster all year round means you will never ever forget about charging it, and you will also get a little bit more use out of your money.

A Lot of Power on Tap

The second reason why we think the Clore ES5000 is the best battery booster jump starter pack is its massive 1500 peak amps and 400 cranking amps. That means on the one hand that you can easily start even the biggest, heaviest diesel truck engine without any problems. And on the other hand, you can be sure that you can jump start even some of the more difficult to start engines. The difference between peak amps and cranking amps refers to the power the jump starter has to turn over the engine. You may have noticed when you try to start your car, sometimes it will take a couple of seconds for the engine to turn over. During that time the power from the battery is actually turning over the entire engine, thus arming the fuel pump, the water pump and several other systems that all need to work in concert for the engine to actually work. If the fuel in the fuel pump has evaporated from the carburator, the engine needs to keep turning over until its power draws in fuel from the back of the car where the fuel tank usually is.

The truth is that it certainly has the cables for it because, besides a powerful battery, a good battery booster needs to have some heavy duty cables that will help transfer that power. The Clore ES5000 has 4 gauge cables that are 43 inches in length so they are the perfect combination of thickness and maneuverability. Getting the thickness of the cables right is another big question for jump starter manufacturers. The thicker the cables are, the more power they will allow to flow through. On the other hand, the thicker they are, the more cumbersome they are to use, particularly in winter. The cold tends to make them extremely difficult to use. Which is why, at 4 gouge, we feel that Clore Automotive have really nailed it. The cables are thick enough that they can transmit enough power to jump start an engine, but still thin enough that you can get them to attach with ease even if the battery is hidden somewhere deep within the engine bay. 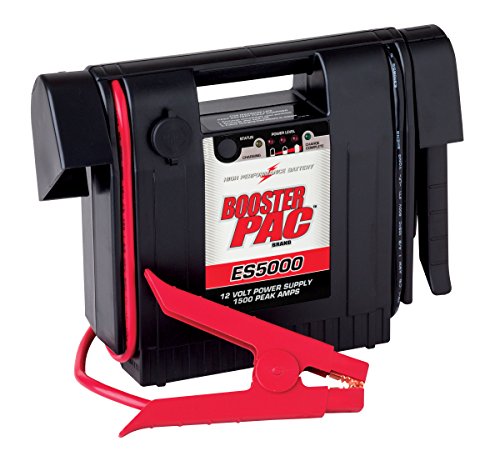 You can actually start most cars by just resting the booster on the ground, but on some of the bigger trucks you may have to find safe place to rest in the engine bay. The other great thing about that huge level of power is that you can actually use this booster to jump start several cars or the same car several times on the same charge. How to Charge Your Jump Starter | Quick Guide and Frequent Questions

Bingo It is a fine jump starter. I wish it came in a variety of colors.... Clore JNC300XL Jump-N-Start Review

A.Rrajani Photographer GREAT POST! THANK YOU FOR SHARING..... How to Charge Your Jump Starter | Quick Guide and Frequent Questions

Bobbie Nichols What if my jump starter won't charge... How to Charge Your Jump Starter | Quick Guide and Frequent Questions

Zenon If my Jump Starter is Dead how I can get it work again?... How to Charge Your Jump Starter | Quick Guide and Frequent Questions
Related Posts

How to Use a Jump Starter: A Beginner’s Guide

The Pros and Cons of Mini Jump Starters