It is for that reason that a lot of sheds in America and across the world have Black and Decker tools, and, if that is the case, you probably would like to fill out your collection with a Black and Decker jump starter.

Depending on the size of your car, as well as the extra options you would value in a jump starter, you currently have 2 options, the PPRH5B Power Station or the J312B 600 Amp Jump Starter. 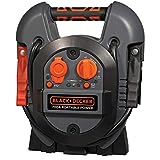 You should start by taking into consideration the Black and Decker PPRH5B Power Station. It is the more expensive of the 2 but you do get a lot more. The unit itself is called both a power station and a jump starter.

From the jump starter perspective, there is virtually no car, truck or SUV that cannot be jump started in a matter of minutes by the PPRH5B. It delivers a peak of 950 Amps, and 450 instant Amps. That means the car will have 450 Amps of power to heat up its glow plugs, arm its diesel pump and get everything ready to start, and then, at the crucial moment, it will be able to draw on 950 Amps of raw power to turn the engine over.

However, all that poetry takes a back seat to the real features of the PPRH5B Power Station. It comes with your standard 120 psi air compressor that you can use to inflate anything from tires to beach volleyballs if the fancy takes you that way.

It also has a 500 W inverter that converts the 12 volt DC current supplied by your car into an 120 v AC wall socket style power. For those of you considering the option of powering your “off the grid” cabin, this would be an ideal solution.

In fact, the EV, electric vehicle, community has been debating the various alternatives they have to power homes while drawing on the massive amounts of power the cars have. The wildfires in California coupled with the power outages have made this idea a popular one, and the fact is the Black and Decker Power Station is the perfect solution for those situations.

In terms of the power output most inverters hover between 100 and 300 watts although, if you have a lot of cash to through around, you could also buy a 1000 watt inverter. For that reason, the reasonably priced, relatively powerful Black and Decker, with the multitude of other features it carries, is actually the best solution to providing power on the go. 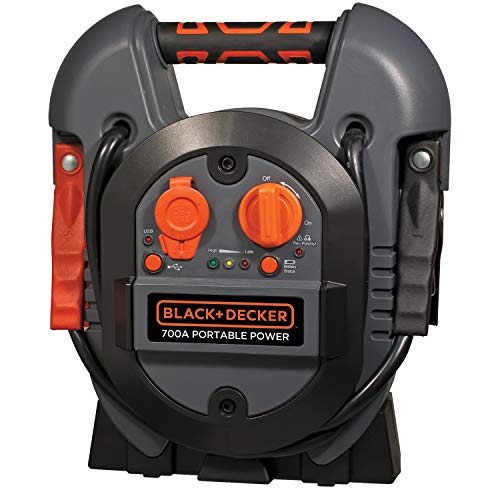 You should also take into consideration that, unlike other power inverters, the Black and Decker PPRH5B Power Station has its own internal battery. Usually that is used to jump start a car, but it holds enough power that you can plug in your USB style charging cables, whatever they may be, and charge anything they usually work on, like iPhone, smartphone, smartwatch, in some cases laptops. You can even use the AC plug with your usual laptop charger and charge your laptop.

Although the previous Black and Decker PPRH5B looks like an awesome tool for any car enthusiast, the fact remains that you may not need all the bells and whistles. Off grid living is not for everybody and spending that much money may not make too much sense for what could quickly become just a super interesting toy for adults.

So if that is the case, the honest Black and Decker J312B Jump Starter is the easy to use tool you will appreciate. It has a clean 600 amps of peak jump starting power and 300 amps of instant starting amps. In case you are wondering 600 amps are more than enough for even the larger 6 liter diesel engines and, because of the thickness of the cables, you should not have any problems just hooking up the jump starter and turning on the engine.

One feature that is slowly becoming the standard, although it certainly was not several decades ago, is the reverse polarity alarm. It will notify you not only if you connect the cables the wrong way around, meaning the positive to the negative, but also if there is an unsecure connection to the poles on the battery. Quite often, a jump starter will not work properly, and sometimes even the car’s very own battery will register as failing when, in fact, the cables are not connected properly. So you can think of this jump starter also as a diagnostic tool.

The almost standard by now USB port is still present even on this jump starter so you can play around with it and, on occasion, charge your phone or laptop. In terms of mAh, it has plenty to charge your phone many times over so if you are in the rare occasion where you can use the jump starter as a smartphone charger, you can certainly count on an almost endless supply of power. 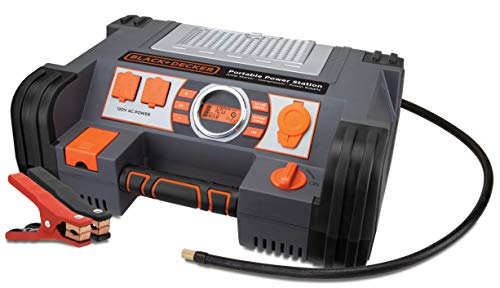 The other important feature is the 12 v power port similar to one that you would get on a car. While you cannot actually use this jump starter as an inverter, you do have the option of plugging in almost any type of device that will take this type of plug. On rare occasions people have used the Black and Decker J312B Jump Starter as a power unit for a mini fridge, while out on camping and you can and certainly should take advantage of the many features a jump starter provides. How to Charge Your Jump Starter | Quick Guide and Frequent Questions

Bingo It is a fine jump starter. I wish it came in a variety of colors.... Clore JNC300XL Jump-N-Start Review

A.Rrajani Photographer GREAT POST! THANK YOU FOR SHARING..... How to Charge Your Jump Starter | Quick Guide and Frequent Questions

Bobbie Nichols What if my jump starter won't charge... How to Charge Your Jump Starter | Quick Guide and Frequent Questions

Zenon If my Jump Starter is Dead how I can get it work again?... How to Charge Your Jump Starter | Quick Guide and Frequent Questions
Related Posts

The Pros and Cons of Mini Jump Starters

How to Use a Jump Starter: A Beginner’s Guide